Savior in the City 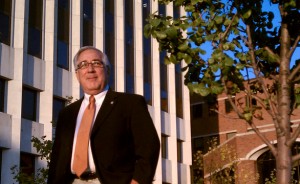 Developer Laurence Glazer did not exactly start out on a shoestring.

But the considerable real estate empire he oversees today as CEO and managing partner of Buckingham Properties LLC began as a few apartment properties in the Park Avenue area.

Glazer’s holdings now include more than 2 million square feet of industrial and warehouse space in the Rochester area and in Florida, several shopping centers in Pittsford, a couple of historic Victorian mansions and trendy lofts in painstakingly renovated former Rochester factories.

At Alexander Park, an eight-acre site connecting the city’s Park Avenue, Upper Monroe and East End neighborhoods, Glazer is midstream in a massive project that he hopes will transform what was the largely empty and now mostly demolished Genesee Hospital, replacing it with a mixed-use development that includes housing, retail and office space.

Glazer’s portfolio also includes 290 acres of developable land. Through his Buckingham Construction LLC subsidiary, he is ready to build or modify structures to suit commercial tenants of various stripes.

He oversees his expanding empire from 1 S. Washington St., onetime headquarters of a railroad, which he lovingly restored, uncovering decorative plaster, marble and brass features.

Glazer got his start in real estate in 1970. Local attorney Harold Samloff, an acquaintance and sometime tennis partner, approached him with a deal to buy into a five-unit apartment property on Buckingham Street. Samloff, who already had a partner in a Buckingham Street rental property, wanted to buy a second building. His partner was not interested, so he called Glazer, who was game and sank $1,000 into the deal.

Neither Samloff, who retired from Buckingham and relocated to Arizona some 10 years ago, nor Glazer initially saw the real estate venture as anything more than a sideline that might provide some retirement income.

Asked what spurred him to move beyond the role of small-time landlord to one of developer, Glazer said: “I don’t know. I enjoyed it. It was a mental challenge.”

Glazer, 66, grew up in modest circumstances in an elm-shaded North Buffalo neighborhood of unassuming two-family homes. He earned an MBA from Columbia University and worked for a while in finance in Manhattan before marrying Jane Lovenheim, a Brighton girl whose family owned the commercial printing firm Great Lakes Press.

In 1970, Glazer went to work for the printing company. He ended up as CEO, a position he held until 1983, when the printing business was sold to the area’s biggest commercial printer at that time, Case Hoyt Corp., for some $46 million.

Glazer’s and Samloff’s first move beyond residential real estate came with the purchase of properties on the city’s Monroe Avenue commercial strip, an area that had seen better days. Though many might have seen such purchases as foolhardy, Glazer said he never considered them risky, regarding them only as a challenge.

As the partners improved and leased properties, the Monroe Avenue strip evolved into a mecca of trendy shops and restaurants. Though Buckingham no longer owns the properties and Monroe Avenue never quite achieved the gentrified sheen of Park Avenue, the strip is still one of the city’s livelier areas.

As Buckingham expanded, Glazer taught himself skills as a project planner, general contractor, estimator and leasing agent. He also learned the art of distinguishing a doable project from a heartbreaker.

The firm’s initial choice of projects was driven partly by necessity, Glazer said. Building new on virgin suburban land might have been a surer and more conventional way to make it as a developer, but “no one would give us the money to buy land. We had to beg, borrow, steal and use credit cards.”

That limitation for Glazer and Samloff was a boon for the city of Rochester, Mayor Thomas Richards said.

“Most of what Buckingham has done is in the city,” Richards said, citing a dozen abandoned factories and empty warehouses that Glazer has turned into business centers and upscale apartments. “We’re very grateful for Larry Glazer.”

Few would have been willing or able to take on the monumental task of leveling Genesee Hospital and redeveloping the site, Richards said. Glazer’s plan for the project goes far beyond replacing the hospital building, promising to transform the site and surrounding blocks from a nondescript tract on the verge of urban blight into a vital city neighborhood.

When he and Samloff started out as developers, Glazer said, “we had no game plan, no predetermined idea. I looked around and thought that if somebody didn’t do something like what we did, the area’s economy would go down the tubes. I never saw what we did as risky. I saw it as hard work.”

Unlike other places I’ve lived, the day I submit a maintenance request it gets done within 24 hours.

Maintenance requests are tackled the day of the request and we are always kept in the loop via email regarding any requests.

The entire staff and family at Buckingham Properties has always taken great care of us. Great group of people.

The staff at Buckingham Properties is always patient and helpful and pays great attention to detail.

The staff at Buckingham Properties LLC always respond in a very timely manner. They’re able to come do any repairs needed quickly and quietly.

We looked at a lot of real estate options when we launched our advisory firm. We held off on committing until we found a space that fit just right and for us that space is Legacy Tower.

Building management is dedicated to maintaining the building and providing superior service to tenants.

Legacy Tower is a beautiful building inside and out and has many attractive amenities and features which make it appealing to lease space here.

Their property management crew has bent over backwards to assist us in whatever we have needed.

Great attention to detail – our new space looks great and the change opened up enough space to add 3 work stations.

Buckingham has been nothing but supportive and a true partner in the success of my business.

Maintenance has always been really helpful and it’s usually taken care of the same day.