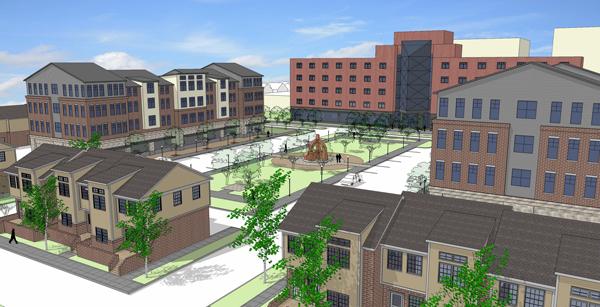 Several tidbits at Thursday’s annual Downtown Rising presentation at the Hyatt were news to me: a new postal substation at West Main and North Plymouth; a restaurant — open to the public — planned for The College at Brockport’s new educational center on Chestnut Street; the city’s imminent move to seek a developer to overhaul the 12-story building at 88 Elm St., next to Midtown.

But most of all, my jaw dropped over all the progress Larry Glazer is making at Alexander Park, his massive redevelopment of the former Genesee Hospital site.

Even Heidi Zimmer-Meyer, president of the Rochester Downtown Development Corp., heard some things she didn’t know.

“Much of what Larry shared was very surprising,” she told me Friday, especially his success at attracting Rochester General Hospital as a tenant. RGH already has an imaging clinic at Alexander Park and “will be a major player” at the site with a dialysis facility and other services, Glazer said.

“They’re destined to become a major downtown medical center … a hospital without beds,” he said.

Zimmer-Meyer said Glazer’s savvy about the local commercial real estate market is unmatched. “He’s the only guy I know who can build speculative office space in this current market and fill it,” she said.

Glazer did that by getting EarthLink, the Atlanta-based telecom that has a major Rochester presence through a string of acquisitions, to move into an 80,000-square-foot spec building he put up on the Monroe Avenue side of Alexander Park.

Now he’s doing the same with RGH, which occupies part of a 20,000-square-foot building on Alexander Street.

Zimmer-Meyer eagerly anticipates what Glazer will do with eight vacant acres on the north side of Alexander Park. He suggested Thursday that a combination of residential, retail and offices is possible as he seeks to make the complex “a place where everybody wants to live and work.”

Glazer has worked wonders on the west side of downtown, in the Cascade District, where he has rehabbed old buildings for loft apartments and office space. But Alexander Park figures to be his crowning achievement.

Unlike other places I’ve lived, the day I submit a maintenance request it gets done within 24 hours.

Maintenance requests are tackled the day of the request and we are always kept in the loop via email regarding any requests.

The entire staff and family at Buckingham Properties has always taken great care of us. Great group of people.

The staff at Buckingham Properties is always patient and helpful and pays great attention to detail.

The staff at Buckingham Properties LLC always respond in a very timely manner. They’re able to come do any repairs needed quickly and quietly.

We looked at a lot of real estate options when we launched our advisory firm. We held off on committing until we found a space that fit just right and for us that space is Legacy Tower.

Building management is dedicated to maintaining the building and providing superior service to tenants.

Legacy Tower is a beautiful building inside and out and has many attractive amenities and features which make it appealing to lease space here.

Their property management crew has bent over backwards to assist us in whatever we have needed.

Great attention to detail – our new space looks great and the change opened up enough space to add 3 work stations.

Buckingham has been nothing but supportive and a true partner in the success of my business.

Maintenance has always been really helpful and it’s usually taken care of the same day.